What are you working on?

Discuss anything not covered by any of the other categories.
Post Reply
3880 posts

Have you tried my CUI (craFTEr User Interface)?

Ah, I haven't tried it, wasn't aware of it being its separate thing. I don't think using entities is that bad of a thing (I think spoike's menusys does the same thing? not sure). I just wanted a bit different kind of a programming style for this system, not sure if it's completely worth it or not but it's been serving me fine for now

Good luck for your next ld!

Thank you! been looking forward to it
Top

toneddu2000 wrote:Really cool, compliments! Is this a dynamic parallel light?

Sorry, I was referring to projected shadow of player

I forgot to mention
Meadow Fun!! - my first commercial game, made with FTEQW game engine
Top

Though im not as active anymore, i have done some work on idtech 4.
Im using code pieces of darkmod to update the old code to more modern standards like AVX and AVX2 SSE* intrinsics, and im using a correct floating point mask for setting precision for both
x87 and SSE codepaths. The SMP changes from darkmod have also made it in, and the game runs a lot better now (no microstutter whatsoever).
The async thread code was also updated a lot as part of the SMP changes and i made a few additions myself.
Loads of dead and unused code was removed (more there than most would think), and im using a hybrid GLSL ARB2 renderer.
The interactions are done with GLSL the rest like shadows and materials are still handled by the old ARB2 shaders.
Since the engine code im using was originally from MH's minimal Doom3, there are no longer any editors in the executable (this is both good and bad).
The old hardware gamma code was modified to include gamma clamping, since thats a restriction on windows > win2k.
Codepaths for 4:3 16:9 and 16:10 resolutions have been added, but you need a menu gui like venoms to have easy access to the new resolutions.
The render debugger was updated substantially with code from fhdoom.
If not enabling things like SSAO or soft shadows, this engine can push close to 60 FPS on ultra settings with vsync on in sikkmod.
The reason it does not work so well with SSAO and soft shadows is the fact that sikkmod uses a hacked depthrenderer to get the nessesary depth capture,
so basically it draws everything twice... Also these effects newer worked to well so dont use them.
But everything else you can have on

Productivity is a state of mind.
Top

how good is the old id tech 4 when it comes to multiplayer? Is it's netcode better than something like Darkplaces or FTE?
Top

Its ok as such, but does not have any packet compression so it might not fare to well with large complicated maps.
Definatly something that could do with an update.
Productivity is a state of mind.
Top

I'm messing around with using blender for creating maps, in this screenshot the map geometry is made in blender, exported as .obj and used as misc_model in a q3bsp map, the sky and water surface are an IQM model. No custom glsl or fog used at all in this scene, just trickery with q3 shaders and transparencies 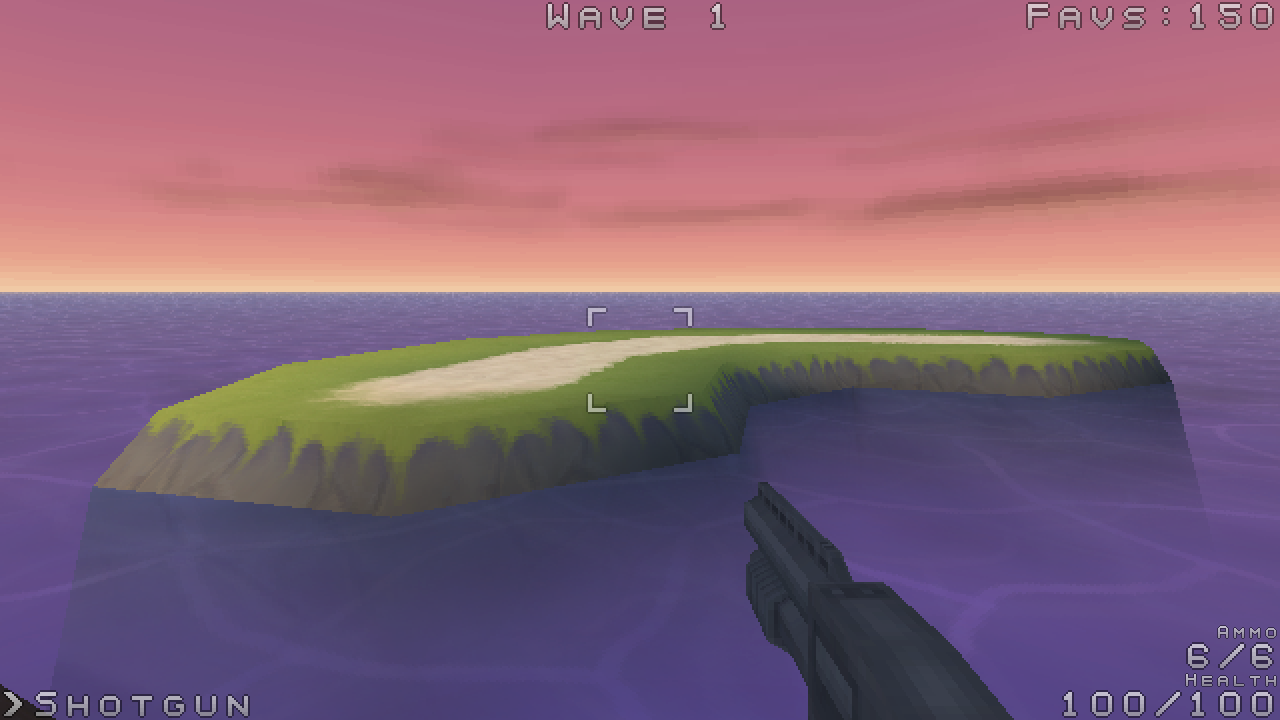 Wow, I really like the sea color and transparency, pretty neat considering no GLSL at all! Keep it up the good work, Shpuld!
Meadow Fun!! - my first commercial game, made with FTEQW game engine
Top

Shpuld: looks like a good way to do outdoor stuff. The shotgun looks cool.

Here's some zombies raising from their graves. They don't have a climb/raise animation, so they just appear walking up, the feature works with any monster. They can be triggered with a trigger if they have a targetname or have them spawn a triggerfield that activate them. Alternatively the same feature can be used to make them appear to be teleported. 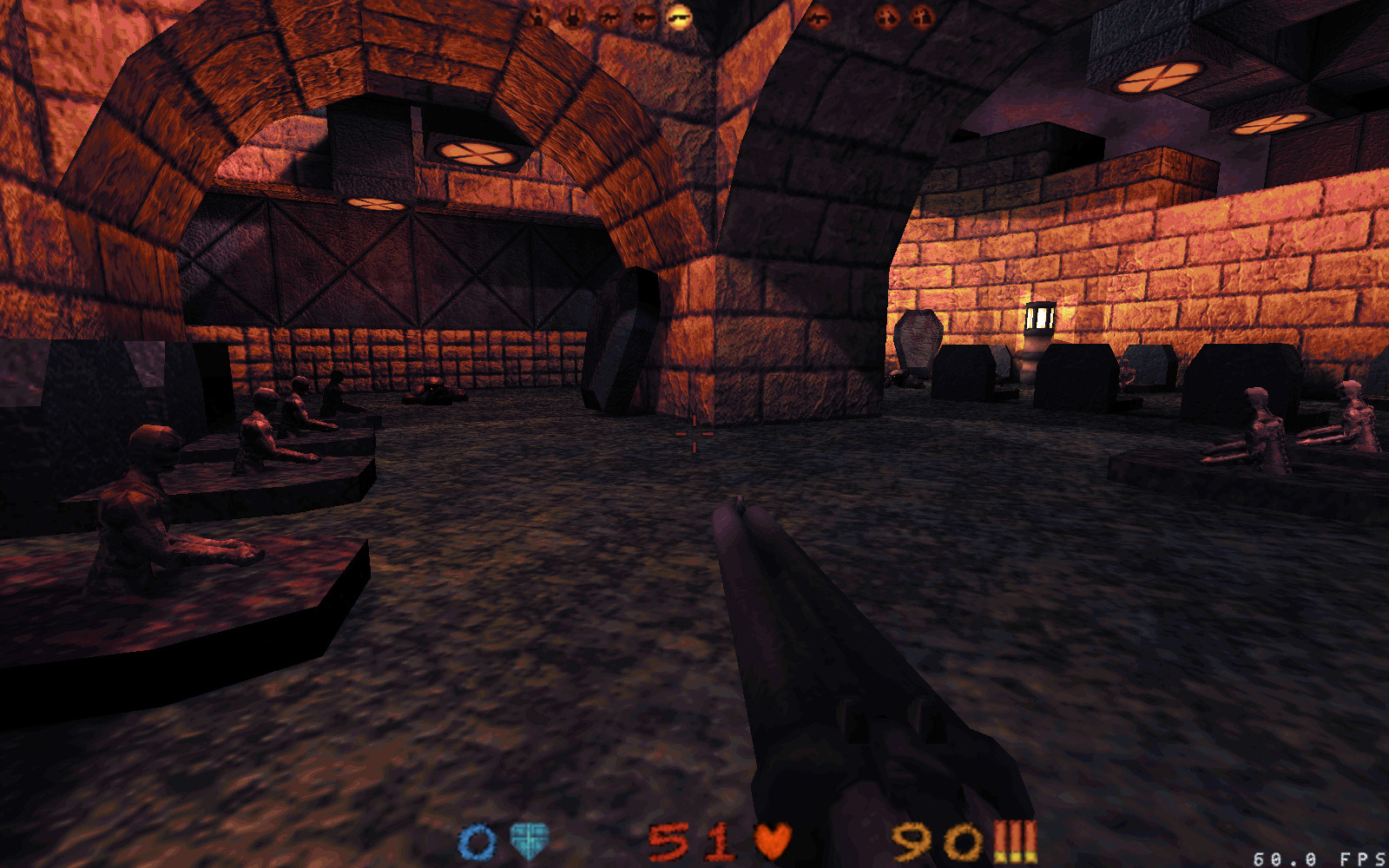 Here's the PBR stuff that I did and was never able to post here until now: 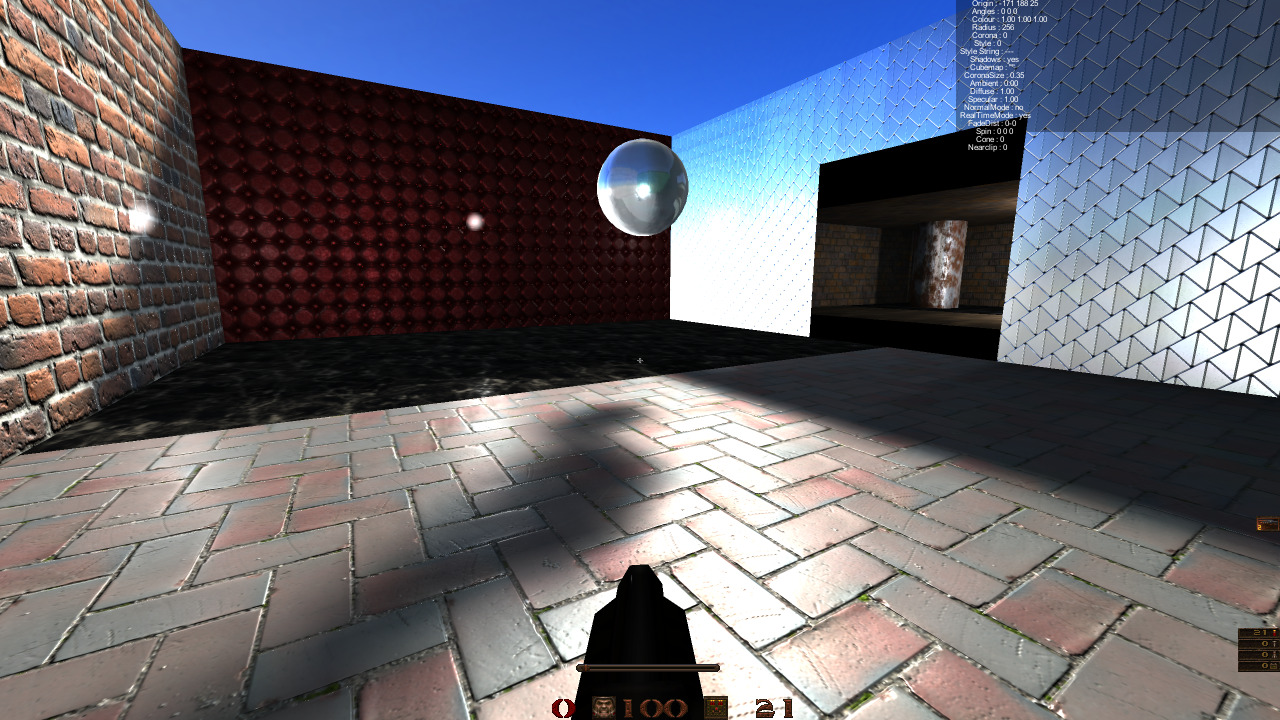 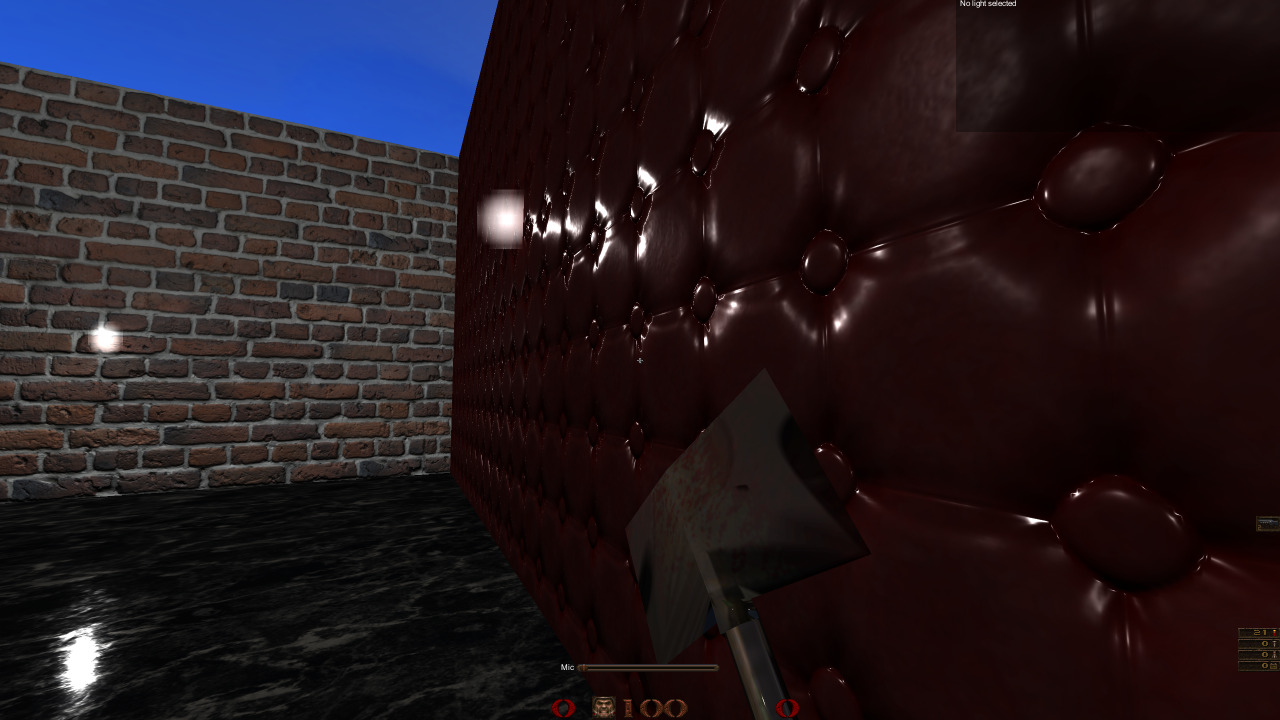 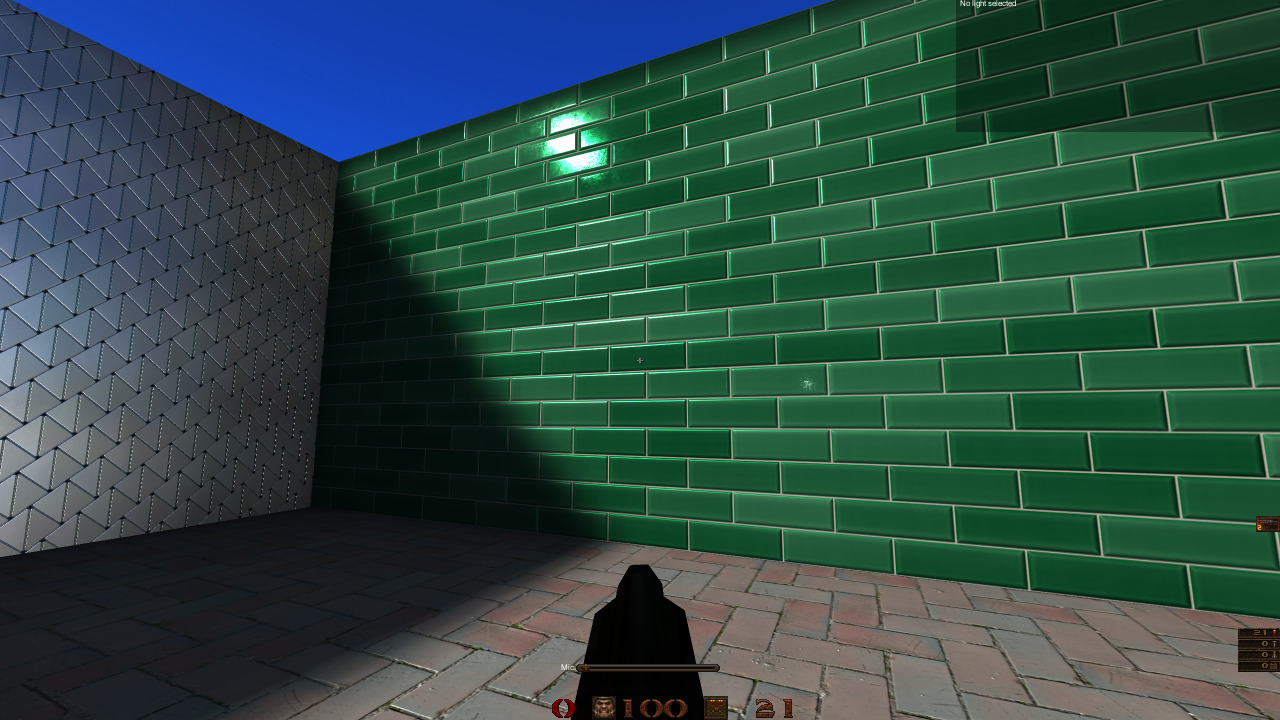 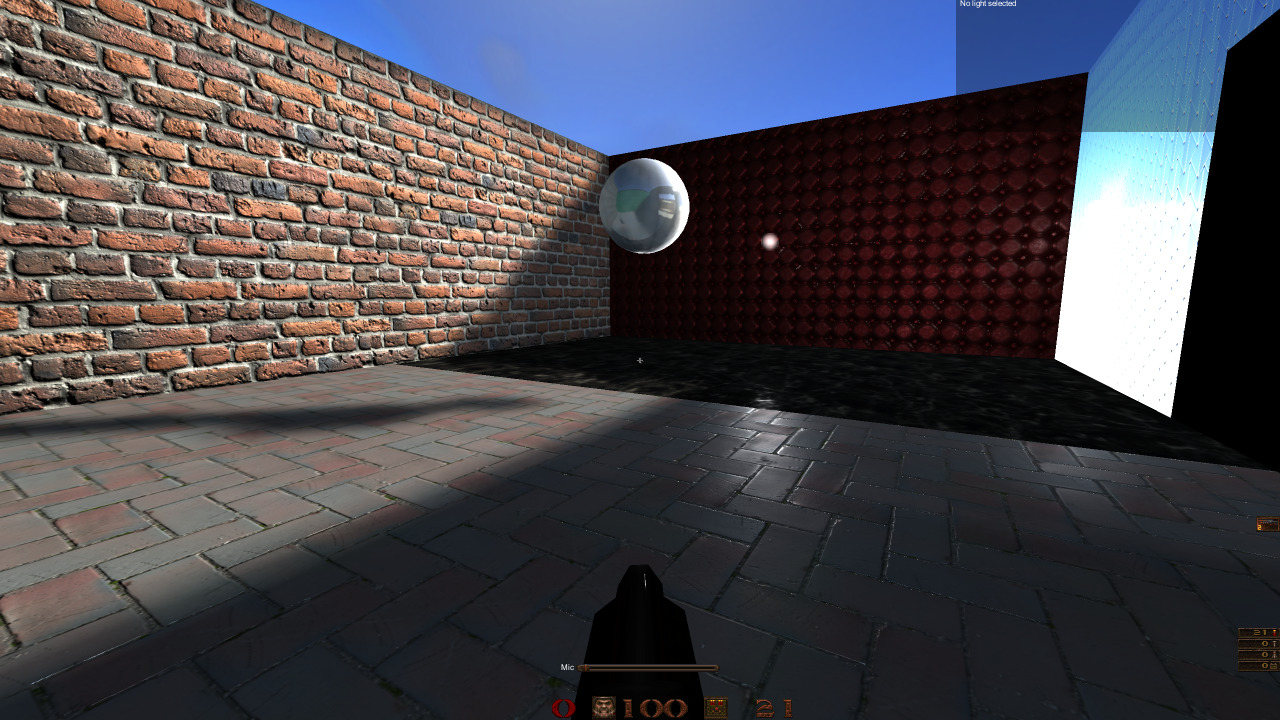 All assets (level and models) take 3 input textures per material.
diffusemap specifies the albedo, normalmap the... normalmap and specularmap will contain metallness, reflectiveness and AO in the RGB.
Most shots are taken with the lightmapped path, where FTEQW will fake one general specular highlight that'll be present all throughout, but I put some realtime lights on top so you can see some more reflections.
The shot with the axe close to the armseat texture was taken in a fully real-time light path.
However you could totally use this material as is in existing maps if you really wanted to, but I'd still recommend placing highlights in places.
Admin of FTEQW | FTEQCC | Frag-Net.com
Top

I'm so glad to see the forum alive again, thank you Spirit for your hard work!

I was working on something recently, should be a simple shooter with a more distinct style and setting, no modern guns and focusing on magic stuff. So far just experimented/worked on visual stuff, so some shaders and particles and general vfx trickery. FTEQW as always!

Environment art with moving clouds, glowing moon, and height fog to mask the bottom of the pit

Lightning and explosion effects done all with FTE particles
Top

retired from the game coding scene years back when this site went boom, i still do some supportive work in the opensource community (Msys2) from time to time supplying patches and general help with getting things to run.

But good to see this site up and about again

Productivity is a state of mind.
Top
Post Reply
3880 posts